7th NISELecture. Antwerp, 5 November 2019. “Catalonia: from Piedmont to Ireland? A historical outlook on the recent evolution of the Catalan movement”.

Posted at h in Events, News by Elly Broes
Share

The seventh NISELecture will be presented by Xosé Núñez Seixas in Antwerp on 5 November 2019. The title for his lecture is “Catalonia: from Piedmont to Ireland? A historical outlook on the recent evolution of the Catalan movement”.

On October 27th 2017, the Catalan Parliament voted a one-sided declaration of independence, a decision that deepened already existing fissures within the Spanish political landscape even further. The Spanish Senate in Madrid stamped the declaration as unconstitutional, and adopted exceptional measures regarding the temporary intervention of Catalan self-government. Several Catalan leaders went on voluntary exile, while others were imprisioned and put on trial. Within the Catalan region dissensions became more accentuated also. A majority of the Catalan electorate decided not to participate in the previous referendum held on October 1st, and over 3,000 companies decided to locate their administrative seats elsewhere. For the time being the declaration may be regarded as the final piece in the history of a national movement born in the leate 19th century, which claimed that Catalan claims for self-government had already started in the failed rebellion of 1640 against the Spanish Crown. As was the case elsewhere in Europe, 19th century romanticism brought about a Catalan cultural renaissance (Renaixença), wich evolved towards a full-fledged political movement since the 1890s, which became increasingly relevant in Catalan and Spanish politics since 1901 and diversified into several political options. On April 14, 1931 a Catalan republic within a future Spanish federal republic was proclaimed. This forced the nascent Second Spanish Republic to adopt a decentralised structure. The Francoist victory in the Spanish civil war brought about the end of Catalan (as well as Basque and Galician) self-government. Spain’s transition into a modern democracy since 1975 paved the way for official recognition of the Catalan language and identity. Catalan nationalists undertook since 1980 a far-reaching task of nation-building, while in their majority accepting the Spanish constitutional framework. Yet, since the frustrated endeavour of the “New Statute” of Autonomy (2006), the bulk of the Catalan movement radicalised its tenets and aimed towards achieving independence, while Spanish nationalism also reinforced itself. In his lecture, prof. dr. Xosé M. Núñez-Seixas (Universidade de Santiago de Compostela) will expose the historical roots of Catalonia’s long quest for national autonomy. By relating to 19th and 20th century national mass movements in Piedmont and Ireland, he will pin down common occurrences and regional specifics in order to explore the limits of Catalan secessionism in a wider contemporary European context. 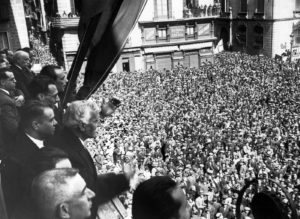 Francesc Macià proclaims the Catalan Republic in Barcelona in 1931.