Publication of end report for the ‘Flying archivist’ project

The ‘Flying archivist’ project (2013-2015) was designed to offer advice and assistance to political parties on safeguarding and managing their archives. The final report has now been published. 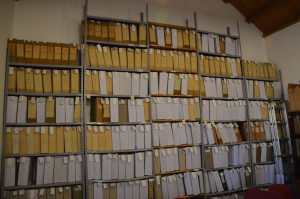 Following up on the Guide to the Archives (GTA) project (2009-2011), where it was suggested to install a so-called ‘flying archivist’ that assists member parties of the European Free Alliance (EFA) on a temporary and limited basis in the archival management which the parties concerned cannot provide, a corresponding project co-funded by the Centre Maurits Coppieters (CMC) was carried out by NISE, in close collaboration with ADVN, from 2013 to 2015.

During the project the archives of three parties were visited: the Moravian party Moravané in the Czech Republic, the Basque party Eusko Alkartasuna (EA) in Spain and the Sardinian party Partito Sardo d’Azione (PsdA) in Italy.

Sharing archival knowledge and skills and assisting in the arrangement of archives, as well as, in one case, offering material help, made a difference for future safeguarding. Archival awareness was moreover significantly raised.

Tom Cobbaert has now written a project end report, describing the actions taken for each party archives and the result so far, and concluding with a set of general recommendations. Look here  for a free copy.

A project meeting at the Fondazione Sardinia in Cagliari, 2 September 2015.