NISE is pleased to welcome dr. Carrie Hamilton (University of Roehampton, UK) for the next NISELecture. On Thursday 24 November, she will present her research on Feminism and nationalism in contemporary Europe: considerations from Spain and the United Kingdom. You can listen to the podcast here.

Feminism’s relationship to nationalism in Europe is historically fraught. On one hand, feminism has long been associated with movements opposed to nationalism: internationalism, peace, anti-racism, migrant and refugee solidarity, transnationalism, and post-nationalism. On the other, there are important examples over the past one hundred years of women’s organisations defending European nationalist and imperialist violence – from the First World War to the early twenty-first century invasions of Afghanistan and Iraq.

But if the question of feminism’s relationship to nationalism remains an open one, feminist activism and theory continue to provide some of the best critical frameworks for the analysis of nationalist movements, including, but also beyond, nationalist gender politics and the issue of women’s participation in nationalist movements. How do contemporary debates in feminist and queer theory around emotions contribute to our understandings of contemporary nationalisms in Europe? In particular, how do they help to explain why nationalisms – both state and peripheral, reactionary and progressive – remain associated with feelings, whether attachment or rejection?

In the light of the recent resurgence of independence movements in Catalonia and Scotland, and in the aftermath of the United Kingdom referendum decision to leave the European Union amidst increasingly open and violent anti-migration mobilization across the UK, the lecture opens these questions about nationalist feelings in relation to the complex relationships between regional/ peripheral nationalisms and state nationalisms. 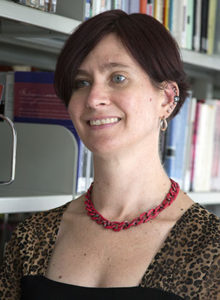 Carrie Hamilton is Reader in History at the University of Roehampton in London. She is the author of Women and ETA: The Gender Politics of Radical Basque Nationalism (2013), as well as numerous publications on gender, nationalism, conflict, revolution, oral history and memory in Spain and Cuba.

Entrance is free, but registration is obligatory. Please mail to elly.broes@nise.eu.

The lecture is organised in cooperation with the
Flemish Heritage Library Hendrik Conscience
& POHIS-Centre for Political History at the University of Antwerp.