Anthony D. Smith has died. One of the most outstanding scholars in nationalism studies has left us. NISE would like to offer its condolences to his family and friends.

“Like so many others who were fortunate to have learned at the feet of Professor Anthony Smith, the renowned scholar of nations and nationalism, I feel a deep sense of mourning at his passing. Among his many qualities, I particularly recall his sincere generosity, his capacity for empathy, his thoughtfulness, his uncanny attention to detail, and, of course, his love of lively debate and discussion. The latter always seemed to provoke in him a small smile and a twinkle in his eye, especially once the debate really began in earnest. It left me with an impression of man who not only loved his craft, but truly loved life.

Although Anthony had already retired by the time I arrived at the LSE to pursue a PhD under his former student Dr John Hutchinson, he was still very much an active presence. Anthony made sure to attend every meeting of the Association for the Study of Ethnicity and Nationalism (ASEN) – a research association he founded with several PhD students in order to provide a locus for the burgeoning field of nationalism studies. Anthony made himself available for all of our queries, from banal questions about the ASEN budget, to requests that he intervene in our late-night debates over the historicity of ethnicity and nationalism. Similarly, almost until his passing, Anthony was ever the energetic and discerning Editor-in-Chief and of Nations and Nationalism, a world leading journal founded by him.

It is difficult to overstate Anthony’s legacy in the study of nations and nationalism. Not only did he introduce a novel approach to understanding these phenomena; through his magisterial overviews, he also created the very framework from which subsequent scholars in the field have engaged in research and debate. Anthony’s original contribution to the field, referred to as ethno-symbolism, provided a robust challenge to received wisdom, providing the necessary trigger for new insights and understanding. His approach, however, was always in the process of becoming, undergoing a subtle evolution over the course of his many books and scholarly articles. Looking across Anthony’s oeuvre leaves the distinct impression that much more was still to come. Succeeding generations of scholars are now left with the daunting task of carrying forward this legacy.

But as much as Anthony was a great scholar and mentor, I will also forever recall him for his boundless empathy. This year I experienced a terrible tragedy with the loss of my wife and son. In the midst of my shock and grief, Anthony wrote me a letter which seemed to say all the things I needed to hear. I can’t count how many times I have re-read his letter. I planned to visit Anthony and, over tea, let him know how much that letter meant to me. Sadly, I didn’t realise that Anthony had already become so ill, and that it was too late. I shall never forget his generosity in the face of mortality. For me, this is the greatest of his teachings.” 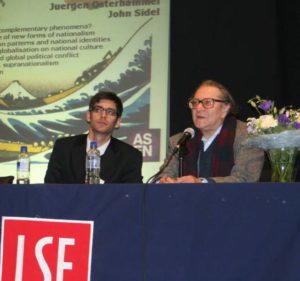 Eric T. Woods and A.D. Smith at the ASEN-conference ‘Nationalism & Globalisation’  in 2009